To the Many: Collected Early Works of Lola Ridge

Transnational long before the term gained currency, Lola Ridge (1873-1941) was one of the most notable poets writing in America from the publication of her first book, The Ghetto, in 1918 until her death, inauspiciously, shortly before America's entry into the Second World War. Included are the complete texts of her first three books of poems, The Ghetto, Sun-Up, and Red Flag, as well as the never before published manuscript Verses (1905), the book of early poems she sought to publish in Australia before departing for America in 1907. With its publication, Lola Ridge's important place in the history of twentieth century poetry takes a significant step toward being recognized and restored.

"It is characteristic of literry history to be forgetful of writers who fall outside of its expected patterns.... Now Daniel Tobin has come to the rescue by editing this enlightened edition of Lola Ridge's affecting, wonderfully accessible poems.  It is high time Lola Ridge was recognized by thousands of women who are triumphantly following in her footsteps today, most of them without even knowing of this interesting, in some ways tragic precursor to whose life and work we should all feel gratefully indebted."--Anne Stevenson 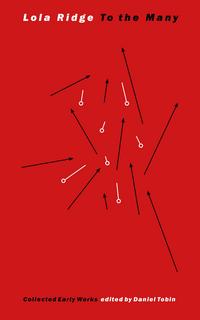