Coming of age in Brooklyn's Bay Ridge, these poems explore what it is to be an Irish American Catholic; a dutiful son of hard drinking, sometimes hilarious and sometimes tragic parents; a son of Brooklyn; and, too, deeply rooted to the country of his ancestors, Ireland. Dark, funny, and sometimes troubling, these poems, always accessible, track a life well lived and felt.

“Daniel Tobin’s new book of poems takes its title and form from the literal structure that dominates the poet’s childhood landscape, the 'gleaming bridge built in our lifetime,' the Verrazano-Narrows in Brooklyn... Tobin has achieved a work of dense complexity that lacks neither technical mastery nor emotional depth... sublime... magnificent”
—The Harvard Review

"Few new books of poetry appear as ambitiously constructed and as admirably attuned to an era or an atmosphere as Daniel Tobin's The Narrows."
—Edward Byrne, One Poet's Notes

"The Narrows is a prodigious feat of raw, physical, moral, psychic and literary energy in which Daniel Tobin recounts the many-sided history of his family... Passionate, complex, and original, The Narrows marks Tobin as one of the best poets of his generation. The Robert Lowell Irish America has been waiting for has arrived."
—Eamonn Wall

This headland is the battered prow
of a ship my silent father rides
into the Atlantic. Gust after gust
buffets the raw crag of his face,
his windbreaker flapping like a sail.

He could be his own father's grandfather
the way he stands before the rail
as others stood before the hold, the blind
journey before them, and nods to me
in recognition despite the ocean between us.

Even he knows on these cliffs the dead
are reading aloud from the book of the wind.

A MOSQUE IN BROOKLYN

There is no prayer that can abolish history,
though in this basement mosque the muezzin's history

gathers in his throat like a tenor's aria
and he calls to God to put an end to history.

From my courtyard room I hear his song ascending,
the divine name whirling its rebuke to history--

would transmit a daily riot of talk and news,
the world boxed inside a glowing square of history.

I've seen them on the street, the faithful in their robes
walking along store-fronts, a different history

clothing them, like me, in our separate skins,
though here we are at the scope-end of history:

Goodness is timeless, the great English poet wrote,
and not just for himself--the crime is history.

But as if to prove the old Sufi fable true
these prayers are lifted on the thermals of history,

and sound strangely like that congregation of birds;
no, the remnant who survived a blighted history,

having stayed their quest into the final valley
where a Great Tree rose, its branches thick as history.

And there they lost themselves, flourishing into the One
without division, without names, without history.

Is that what it means to be an American,
discovering yourself in the distances?--
Like a man on a Greyhound
that leaves the New York Port Authority
and takes the Lincoln Tunnel to the Interstate.
It’s after dark, all the man can see are headlights
passing, a blur of malls and sub-divisions.
He sleeps in his seat beside a stranger,
wakes when the bus pulls in
to a late night road stop. He’s not hungry,
but feels in his gut a tremor
of loneliness
that grows as they pass through Ohio, Indiana,
the furnaces of Hammond and Gary,
fierce as Blake’s Satanic mills,
spewing into the boundless prairie sky.
He looks out for a thousand miles
at the hypnotic emptiness of wheat fields and cornfields,
the cinematic grandeur of the Rockies,
and descends from the Wasatch
to the Great Salt Lake,
a sunset spreading over the earth...

What he wants
is to stand at the other end of it all, to see
the Pacific rolling into headlands
like visible waves of light,
and then to turn back,
the bridge stretching out over the bay below him,
another Narrows,
until he sees that there is no end,
just these waves of water waves of land
flung together,
feeling on his face the rush of wind,
and inside him the growing thought that anywhere
might be home,
since home has become nowhere. 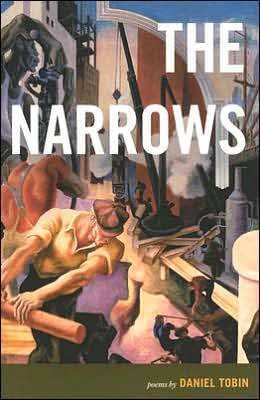