Imagine a poetry equally attuned to mystical theology and game shows, as motivated by '40s horror films as it is by Babylonian mythology: etymology keeps company with television, madrigals jibe with disco, Goya is alongside Hopper and gangsta rap logos, while Aristotle, Meister Eckhart, Yeats, Buddha, Pavarotti, Babe Ruth, and the Three Stooges form an unlikely entourage. Formally various, wildly populated, Second Things, Daniel Tobin's fourth collection of poems, plumbs the complexities of such strange fellowships. These poems comprise a vividly elaborate collage that takes as its presiding theme the mysteries and responsibilities of creation—natural and artistic, physical and metaphysical, bodily and spiritual.

Following 2005's The Narrows, which traces an Irish-American boy-to-manhood in lush poems reminiscent of both Derek Walcott and Seamus Heaney, Second Things evinces a tone that is wholly new. Here, Tobin's readers will recognize a sensibility honed in a boyhood of Catholic mysteries and New York working class immigrant communities, and in addition, they will hear from Tobin a voice more fierce, its ruminations both more urgent and more jubilant than ever.
—Poetry Daily

One page of the newspaper splays like wings
of a seagull against the storm-fence raised
around the retreat that was a college
in the last century, before the church
renovated it, and built the old folks home
in the same faux gothic with new cream brick.
I pick up such things, local history,
just by living long enough in one place
and never need to visit the town archives,
or the bookstore on Main, which I do,
to riffle through "the new and gently used"
and banter with the owner when I buy;
or, today, pass through empty-handed
into the street, the names of buildings
still readable on the few preserved facades,
and the memory of the first occupants
more effaced than some peeling billboard
uncovered like one of Pompeii's frescos
I might read about in a newspaper—
this one, trapped against the chain-link,
a feature in the Metro section beside
Gazebo Nearly Ready For The Fourth;
though it could be headlines, election news,
a house burned in someone else's tragedy,
cars and bikes for sale, furniture and estates,
prom night previews, obits, the sports page
with its important, forgettable scores.
I'd transpose it into a blazing tree,
transfigure it to be a golden bird
or fire-fangled peacock, this urgent scrap,
scavenger flapping madly to ascend
when I happen by, lusty for symbols,
then turn the corner only to hear music
pouring—no lie—from my own house, my wife
singing madrigals—Adieu, Sweet Amarylis—
and can almost feel myself beginning
to bleed like so much ink into the earth,
bleed here and now into nothing, and fly.

Whenever I look at this photograph
that hangs beside the bookshelf in my study, I sharpen
my eyes like a batter
who trains on the curveball bending toward the plate,
trying to judge

its spin. And like a curve it seems
to defy physics, how these two once occupied the same
time and space
and still do inside this frame: The Babe as you’d expect
commanding the center,

the rest of the hunting party spreading out
the lesser of the tribe around their chief;
and there, beside him, his hair
slicked back, no longer a wild clownish ring, looking
the young rabbi:

Larry, the lowliest stooge, third fiddle
after Moe and Curly, the straight man whose antic pleas
always seemed more desperate
for having glimpsed the desperate truth. Forget Petroclus;
think instead of Achilles

in love with Caliban, or Gilgamesh
roving out for battle beside Polonius. Think of the Stooges
beside a beefcake Herakles
in a wacky fifties riff on Homeric myth. Or, rather, think
of Everett Brundage

who owned the lodge where this photo
was taken--it had to be sometime in the thirties--
before the Babe’s moon-shot drives
arced into legend; before Larry starred with Curly and Moe
in their madcap parody

of Hilter’s Germany. I have a tee shirt that reads
“I’ve seen the future, and it’s Fine,” where Larry’s face
shrieks in neon
as if he’d shaken hands with a thousand volts, his whole head
flashing like an absurd Medusa.

Though when I remember Everett,
I think of a man who for years kept this lodge alive,
a taxidermist’s paradise
of deer heads, antlers, bobcats, and one full-size black bear
on the fringe of big resorts.

I remember he had the keenest eyes,
that the whole raucous crowd of locals and exiles
from the city gathered
at his bar, one manifold tribe roaring on into the night.
But I remember, too,

those nights he drank until my father
closed the bar and drove him home; how he lived alone
though he had a wife
who left him; how his help—they were friends—stole quietly
from the till,

and he lost the lodge, the one thing he loved.
And whenever I remember how they found him sprawled
dead in the dive
he’d opened on the highway, it makes me think of the phrase
"Chin music,"

meaning a high hard one, a tough pitcher’s
brush back of the batter who leans too far over the plate.
“Chin music” was what he said
that afternoon my father drove us down to the lodge
just before it closed.

On TV the pitcher reared into his wind-up,
and swooping down fired a fastball that started letter high,
and rose in a perfect
jet stream directly at the batter’s head, driving him to the dirt.
“That’s chin music,”

Everett said, leaning his big body
over the bar, his broad nose and wry grin not unlike the Babe’s,
“it’s how life plays you
before you go down for good." Do I have to say he gave me
the photo for a gift,

that I’m as awestruck now by its sheer
improbability, having watched those stilted newsreels
of the great,
the baffled mania of the stooge who took hammer blows to his head,
who had his eyes

poked out, it seemed, a thousand times?—
the stooges, with their own chin music, that made me think
there was no pain.
In the photograph the turkey splays its feathers before the hunters,
one a hero,

one a thoughtful man who played the fool.
Did Everett take this picture, thrilled to have fame and greatness
come to this unlikely place?
The crowd fans out, mostly smiling, around the kill: Who are
all these nameless men?

Snake that sheds
its skin until
there is only skin
and no snake,
and the skin is this
living world.

Holy, Holy, Holy
God without
power or might.
Out of you all
things pour until
you are nothing—

a desire bedded
into the body's
lush ciphers,
sweet absence
where you touch us
now and now and now.

In the beginning was the hand, opposable,
little god's head of a fist,

into the void. The hand wants to be
an oracle, to bestow

on the world its five-fold wisdom,
glossolalia of wants,

the prayer goes up. And the god
lies down in its emptiness.

A CONE OF THE EUCALYPTUS

So many piled beneath the peeling tree
it seems a late polluted hail had come,
some antediluvian, post-biblical plague
that fell and fell and blotted out the sun
and would not melt, but scattered like leaves

across the walk where you bend down, pick one,
then place it squarely in my palm. "Look, Dan,
at the star-shape on the crown, the hollow cone
a bloom of five born out of four." And soon
you're quoting sages—Plato and Thomas Browne—

"the quincunx blossoming from quaternity":
such mystical symmetries, to which you add
bodies in the Kaballah, the Tarot, the Torah,
Christ on the Cross, snowflakes, the human hand.
I run my thumb along the pith. Four scars

ascend to where something—call it nature—
fixed hull to crest, each rough plane perfected
like a fossil browned by centuries in earth,
and five carved points that open into black,
and look like a seal, and are deeply cured.

Mark, my reb, whose name doubles wisdom,
you could convince me to believe in Blake
and his eternity, a heaven encased in words;
this shell the image my own soul might make,
its wounds at seed under bone-white boughs. 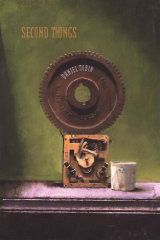