Passage to the Center: Imagination and the Sacred in the Poetry of Seamus Heaney

Nobel Laureate Seamus Heaney, author of nine collections of poetry and three volumes of influential essays, is regarded by many as the greatest Irish poet since Yeats. Passage to the Center is the most comprehensive critical treatment to date on Heaney's poetry and the first to study Heaney's entire body of work (including his recent volumes, Seeing Things and The Spirit Level). It is also the first to examine the poems from the perspective of religion, one of Heaney's guiding preoccupations. According to Tobin, the growth of Heaney's poetry may be charted through the recurrent figure of "the center," a key image in the relationship that evolved over time between the poet and his inherited place, an evolution that involved the continual re-evaluation and re-vision of imaginative boundaries. In a way that previous studies have not, Tobin's work examines Heaney's poetry in the context of modernist and postmodernist concerns about the desacralizing of civilization and provides a challenging engagement with the work of a living master.

"The readings are clear, complete, thorough, and give insight on both the poetry and Heaney's use of poetics."
—Robert F. Garratt

“So refreshingly original and so much needed... Tobin opens new ground as he strikes inwards and downwards, unearthing interpretive treasures and, best of all, new kinds of questions.”
—South Atlantic Review

“A thorough analysis of Heaney’s oeuvre to date, one that avoids the limitations of formalism and sectarian ideology.”
—Irish Studies Review

“Tobin’s very detailed and admirably interconnected commentary on the poems themselves is impressive.”
—World Literature Today

From Chapter 6, "A Poet's Rite of Passage: Station Island"

Robert Frost observed that poetry begins in delight and ends in wisdom. When asked in an interview whether the same could be said of a poet's career, Seamus Heaney responded by saying that a poet "begin in delight and ends in self-consciousness."1 In their claims about poetic practice, both Frost and Heaney embrace the commonplace notion that poets first begin to find a voice by delighting in language. Beyond this, their statements also suggest that such playful indulgence leads, or should lead, not only to a greater command of language but to a more pervasive and subtle knowledge of the relationship between self and world. one might even say that implicit in both poets' views is a belief in the idea that the delights of language occasion a kind of fortunate fall. As the primary consequence of this fall the poet is called to quest after, in Frost's understanding, "wisdom," and in Heaney's, "self-consciousness." Whatever Frost meant by "wisdom"—certainly among other things the ability to plumb the more intransigent regions of the soul's "desert places"—Heaney's quest demands that he explore the process of self-definition by tracing through his art the formative experiences that helped mold his identity. As I have taken pains to show, Heaney's poetry entails a paradox in which the very outward movement of the quest calls for a radical inward scrutiny, an interrogation into the origins of self. One might even see this interrogative journey as a transgressive inquiry into the past, a self-questioning quest in which the poet finds creative replenishment by reconsidering, indeed by reenvisioning, the source of who he is and therefore of his art. Nowhere is this more true than in Station Island.

In an early statement about his work, Heaney claimed that poetry of any power is "deeper than its declared meaning," and that ultimately the root of poetry resides in an urge to lay bare "patterns in a reality beyond the poet" (P 11). At first glance this claim would seem to contradict the observation quoted above, that self-consciousness is the goal of the poet's career. For a poet like Heaney, however, who early on in his career called himself "Jungian in religion" the contradiction is only apparent.2 Such patterns of transcendent realities as those disclosed in dreams, fairytales, and myths, are necessary not only for self-growth but for the self's very integrity. According to Jung the process of individuation is a "psychic rite" that places the burden of the self on the individual's imagination, certainly on Heaney's, for if any pattern predominates in his work it is the quest, or rite of passage. Heaney himself stated that "Station Island" is patterned on the monomyth of individuation discussed in Joseph Campbell's The Hero with a Thousand Faces:3 the mythological adventure of the hero magnifies "the formula of rites of passage: separation—initiation—return: a hero ventures forth from the world of common day into a region of supernatural wonder: fabulous forces are encountered and a decisive victory is won: the hero comes back from his mysterious adventure with the power to bestow boons on his fellow man" as he unlocks and releases again "the flow of life into the body of the world."4

Campbell's remarks convey a conjunction of the psychological and the tribal that in Heaney's work becomes a conjunction of the psychological and the historical. As Heaney would have it, it is the tribal history of his land that so pervades his sense of self and therefore his art. Through the key pattern f the rite of passage, this conjunction may be extended further to embrace the metaphysical or religious concerns that also pervade Heaney's work. As such, Heaney's own use of the pattern reiterates Mircea Eliade's assertion that such rites repeat the transformation form virtual life to formed existence enacted in illo tempore, at the beginning of time.5 Through such rites an initiate leaves profane time and embarks on a return to sacred origins. The passage presupposes that we are not complete at birth and must be born, spiritually, a second time.6 We are not finished creatures. Rather, we reach spiritual maturity through trials suggestive of the wider cosmic drama It is this dramatic quest for spiritual as well as artistic maturity that is tacitly present in the mythic and religious import of Heaney's early poems, a quest that reveals itself again in his seemingly insatiable need to "Retrace the path back" to origins. This central preoccupation is taken up again in "Station Island" where, as in any rite of passage, the pilgrim encounters the psychological, artistic, tribal, historical, religious, and mythical forces that have shaped his life and his world. 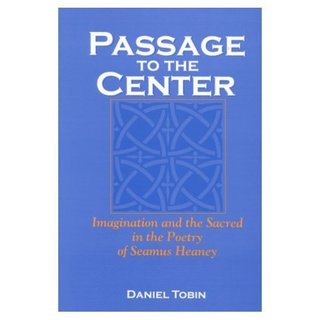