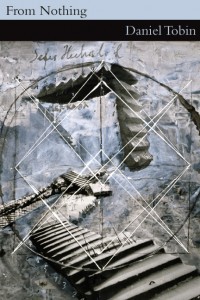 PRAISE FOR FROM NOTHING

"In From Nothing Daniel Tobin explores the intersections of war and science, rationality, and the vastly large and intensely small in and through the characters and voices of the major figures in the scientific community of the twentieth century, most notably the Jesuit priest and mathematician, Georges Lemaître. Tobin brings his learning and astounding imaginative powers to bear on such central questions as the origin and end of the universe, how something came from nothing, human depredation and beauty, and the intractable mystery of time. This is a memorable, tragic, and moving book that should be read by everyone who wonders how we got here and what our being here can mean." — Alan Shapiro

"In his lyrical and narrative suite of poems From Nothing, Daniel Tobin weaves the history of the cosmos into the biography of the Belgian Jesuit priest Georges Lemaître, a physicist who realized that Einstein's General Relativity Theory entailed 'the Big Bang' and foresaw the discovery of the Cosmic Microwave Background. The poet draws the weft of scientific vocabulary, poetically, through the warp of everyday speech, with occasional over-embroidery of hymn and prayer. While managing to convey quite a bit of information about modern cosmology, Tobin also creates a moving portrait of a singular, gifted, and compassionate human being." — Emily Grosholz

"Tobin’s writing explodes onto the page with white-hot intensity, its numinous words and birthing suns expanding and cooling first into elegance and then into a compassionate understanding of our human condition." --Dennis Daly

"... the intellectual and aesthetic ambition of this collection exceeds that of nearly every collection I’ve read this year.... If you’re looking... for poetry that stimulates your intellect, that demonstrates how knowledge can inform and enhance art, that is willing to explore ultimate questions and different methods of answering them... read From Nothing. " --The Kenyon Review

"Daniel Tobin is a masterful poet who works from vibration outward—first music, then form, finally ideas—like the cosmos he describes. From Nothing is one of those books that exalts the mind by its unflinching meticulousness and intellectual breadth. But its greatest accomplishment is the poetry: he holds all this movement so perfectly still."
--David Keplinger

To figure from nothing, holiness in perihelion:
though one must not proclaim it, but let the matter
spin along its poles into the bright entanglements,

like two particles of light flung to opposite zones,
and still the one moves with and how the other moves—
love’s choreography in the elegance of the dance.

Though maybe it’s more like matter and antimatter,
the one canceling the other in a blinding negation,
number and noumen locked in their separate estates.

You would not collapse them to a point’s white heat,
but kept them before you, your physics and your faith,
the divergent roads with their singular horizon

where the radius of space converges into zero,
where what was, is, will be waxes without boundary
into seed and sand grain, a Cepheid luster of eyes—

news of the minor signature keyed from everywhere,
the primal radiation, omnipresent, the prodigal
wave arriving from its Now that has no yesterday,

the proof of your calculus, the tour of the expanse:
“The evolution of the universe might be compared
to a display of fireworks that has just ended,

some few red wisps, ashes and smoke. So we stand
on a well-cooled cinder to see the fading of suns,
to glimpse a vanished brilliance, the origin of worlds.”

exclusive of the death squads, and each one eclipsed
behind the death gate’s limit, its prevailing West,
and Himmler petitioning the Minister of Transport

“I must have more trains”: among them cattle cars
out of Brussels, out of Antwerp via Breendonck
and Malines—your seminary within hailing distance

of the moated barracks where Öbersturnführer Asche
assembles them for Auschwitz, Berkenau, Bergen-Belsen:
Asche to ash along the side line track through Louvain.

That fall afternoon, your father collapses on a tram
and the one who sits beside him wears a yellow star.
We have the duty of conscience to strive for resistance

declares His Holiness Van Roey. And you, good son
charged to attend your mother, leaven act with prayer
like an untestable theorem, listening into the vacuum.

But to see the singularity in a sphere composed of dust,
to see beyond the given limit to the horizon where light
plunges permanently into the void: your “dust solution”

by which space and time contract to nil—how to reconcile
the math when the metaphor waxes real, gravity, graves,
cinder clouds, a calculus of stars red shifting on the rails?

Darkness on the face of the deep, darkness hidden
by darkness, no time before time, before existence
and non-existence, but to climb as the mystic said

to the high mountains, where there is no shadow,
only sun. So in mind you reverse the symmetry
to walk beside him in Grönendael, green valley,

with his tablet and stylus to the Soignes’ axel tree
where clarity shines with the exactness of equations,
his soul become a live coal in the fire of infinite love

by which he sees through the multiplicity of things:
To know it we must be in it, beyond the mind, above
our created being, in that Eternal Point where all

our lines begin and end, where they lose their name,
become that very One the Point is, and yet remain
themselves nought else but lines that come to an end.

To give, then, image to the Imageless, for in depths
of the Real there is no ground, only fathomless sea,
life fashioned on the bedrock of the empty Abyss:

while light in its nakedness penetrates air, a plenitude,
like the dusk sky descended perfectly inside a cove,
the mind, now, observing, unguarded and un-walled.