The Book of Irish American Poetry draws together the best and the most representative poetry by Irish Americans and about Irish America that has been written over the past three hundred years. Daniel Tobin begins with poetry of the “populist period” (poets such as John Boyle O’Reilly), and moves to the work of Irish Americans who have made an indelible imprint on American poetry: Robinson Jeffers, Marianne Moore, Louise Bogan, John Berryman, Thomas McGrath, Robert Creeley, Frank O’Hara, Ted Berrigan, Galway Kinnell, and Alan Dugan, among others. The anthology concludes with distinctive poems by contemporary Irish Americans whose work is likely to stand the test of times, such as Tess Gallagher, Brendan Galvin, and Brigit Pegeen Kelly.

Selected as an "Outstanding" title for 2008 by the University Press Books Committee, American Association of School Librarians and the Public Library Association.

"...a prodigious and remarkable work of literary scholarship. This anthology is far more than an original work of scholarship: it is a major act of recovery, which rescues from oblivion the work of important writers who have been the creators of the Irish American literary consciousness. Professor Tobin has achieved the invention of a whole new field...."—Eammon Wall, Jefferson Smurfit Professor of Irish Studies, University of Missouri-St. Louis

"An informed and informing intelligence, Dan Tobin casts a wide net across the centuries of poetic engagement with Irish and American interaction. The result of his prodigious labor is an indispensable collection—often surprising in its discoveries and juxtapositions, always illuminating of crucial themes." —Charles Fanning, Professor of English and History and Distinguished Scholar, Southern Illinois University Carbondale

"Tobin's 900-plus-page anthology is a gem.... It is an effusive text of Irish American poetry, rather than of Irish American poets, and because of this it is inclusive in a way that one might not expect.... This is an anthology at once rigorously defined and researched and yet also open to every type of poet and poem." — The Virginia Quarterly Review

"This handsome book... is unique in American anthology-making... [It is] a major literary and critical achievement.... It is basically a superb poetic treasury, just as suitable for one’s home collection as for research libraries. Its hundreds of poems... constitute versions of an historical and cultural tradition of enormous importance to America....” — Chronicles: A Magazine of American Culture

"Editor and poet Daniel Tobin took on a mammoth task in attempting to compile the most authoritative collection of Irish-American poetry.... This book is a must-have for lovers of Irish and Irish-American writing.” — Irish America

"An intelligent, imaginative collection that sheds new light on a literary tradition while highlighting exciting work that might otherwise go unnoticed. Definitive enough to belong on the book shelf of any scholar who teaches or writes about American poetry, it is also a marvelous read, a browsing treasure.” — New Hibernia Review

"Tobin as editor reaches beyond ethnic boundaries to capture a deeper and universal sense of freedom and exile. These poets, not all Irish or Irish-American, feel deeply the trauma of history." — Multicultural Review 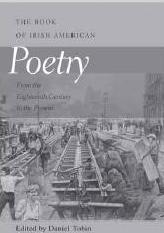