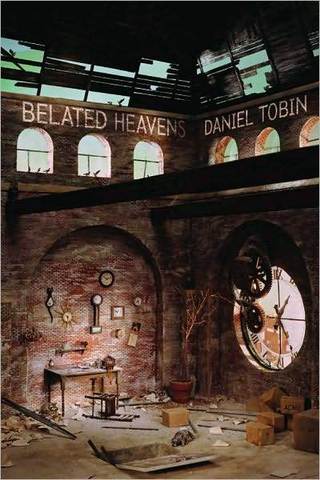 In the title poem of Daniel Tobin’s far-reaching fifth collection, Belated Heavens, the seemingly effortless inflation of an air mattress “out of nothing, so nothing fills [it]” playfully calls to mind “the turtle of creation” as it “swims through time.” Throughout his latest book of poems, Tobin observes thought-provoking harmonies across grand scales: in “A Palm Print at Lascaux,” the speaker reaches out, Alice in Wonderland-style, to set himself within “the steppe / alive in limestone.” Belated Heavens paints the interconnectedness of past times and distant places, from the possibility of an afterlife—“your many dead still nearby / watching you from behind your life’s one-way mirror”—to the “manna in the marmoreal air” of a “Winter Storm, Jerusalem.”

Belated Heavens critiques the “palpable cliché: / art is the bulwark of our fear.” The poet’s work makes him a documentarian who speaks meaningfully where “talking heads drone on.” Tobin’s wit delights—a riff on Frost’s “Mending Wall” inserts “hydrostatic pressure”—but also teaches wisely: you “walk among remnants / of a lost world, even when its not your own.” Using villanelle and paradelle, free verse and blank verse, terza rima and the blues, Belated Heavens weaves diverse iconographies: Babylonian gods, medieval cartography, paparazzi, Neanderthal DNA, the extinctions of languages and species. Tobin sees the world’s sweep and crystallizes it in its troubling fragility.

What’s worse, nearly, than the nothing you hope it’s not
Is the thought of your many dead still nearby
Watching you from behind your life’s one-way mirror.

They seem as they hover behind the living screen,
So close you almost sense them in the play of movement
Glazing off your own form in a shop-front window,

Like the revenants of dogged film noir private eyes
Who shadow their suspect’s every move, who ghost
Their oblivious quarry by blending into the crowd.

Over time, they come to regard your every intimacy
Until you’re naked as a newborn before the afterlife,
The more so since you still believe you are alone,

That your solitude, even in your happiest moments
Spent with your wife or your remaining friends,
Can be unfurled, the banner of your inmost self,

Even if it’s blazoned with the pretentious seal
Of your delusion. Is it their own failures toward you
Summoning them back to the un-resolving world?

Or what Agency do they report to with your foibles,
Mutterings, the wild outbursts of dread and dismay
You thought no one would hear, the unguarded rituals

Performed behind the closed doors they walk through
As if now were the moment they would make your arrest?
Though maybe they’re only present like the part of you

That trails your life like a moon on a clear evening,
A new moon burning its absent reflection in a pond,
The light of its full face turned wholly to the other side.

Koko, who calls herself “Smart Animal Gorilla,” has learned over
a thousand words. A CD of her poems sung by a human choir
is due for release.
News Wire

A thousand words, a thousand sonic baubles
Koko knows, more than most of us
or nearly, who are her hairless cousins,
who hardly savor the supple vocables

of the language (from the Latin, lingua,
meaning “tongue”), as she sounds the silent
amplitudes, a flurry of pirouettes
from the soft pads of her hands, her fingers

shaping signs: her by now studied translation
from Modern Ape to Trainer’s English,
while her kin diminish like Manx and Cornish
into the hellbox of extinction….

Koko, inscribe your elegies from the cage
for the lost forest, to the human choir
who’ve assembled in the studio’s glare
to sing the primal notes of your name—

Something waits for the body in whispers,
Diamond hint in seasons of repetition.
Or surely it lifts on a still fulcrum.
Let me rest, its novice, like all nagging life
Until desire moves, blown seed, nothing's name.
There it is, Thresh-Hold, lost song to be praised.

A PALM PRINT IN LASCAUX

I, too, want to reach behind the stone veil,
To follow the rabbit down its winding hole
Into the whisper-chamber, bosses like sails
Billowing in an earthen wind, this first world
With its presences recursive in the maze—
Bison, ibex, mammoth, and stag, the steppe
Alive in limestone on the vaulted frieze;
Down with my lamp to terra incognita,
Magician in my skin-cape conjuring beasts,
Trove of the underworld’s infinite hat.

Tallow smell above the axial gallery,
An island of light in the hall of bulls
Illuminates the surging cavalcade,
As if stone had fixed itself from shifting clouds
Into these forms heard by the searching hand.
Ochre hide. Black blooms of antlers splay
From a stag’s head. Auroch’s flaring horns.
Something in the mind cleaves to this rock-face
Like a cave-bear’s tooth housed in its niche,
Scoured bones articulated in their graves.

What hides, parietal, in the mask of dark—
After-image the child fashions in sleep,
A drunk’s tremens, a screensaver’s bright mark,
Virtual gallop across the humming screen?
As in a high nave curving heavenward
Where the blessed pose in their spirit ride,
So these inhuman majesties surround
The descendant. Flint-knapped, finger-fluted,
Walls move, tangible air. A horse reels, heaved
Back like a penitent: the stunned, healed soul.

The wounded man recumbent in the shaft
Awaits the bison’s charge, arms outstretched
To embrace What Comes. Beside him his staff
Floats in whitewash where an all-seeing bird
Contemplates a beast, tail-up, whose horned head
Dissolves into the membrane of the vision.
Skeletal soul, mesne of the living and dead,
First émigré to the haunts of the human,
Imaginer, your shadow runs like a brede
Through the living coverts of our sojourn.

Glyph-shapes, frescos, graffiti on their stall…
On Ellis Island once I saw a hand
Traced in detention beside the Great Hall,
Fingers flared like this one spit-painted
In the cave, an earth and breath communion,
As though the negative of a child’s print.
When the dying tallow lamp of the sun
Burgeons to nothing and snuffs the planet
There will be just such a form to absence,
A space left in space, immaculate—.

AS ANGELS IN SOME BRIGHTER DREAMS

For Sally, who kept the shop….

Even you gone into a world of light,
Or some metaphysical luncheonette
That smells in death of your shop’s mélange—
Cheeseburger, brisket, baba ganouj.
It’s seven a.m. in eternity.
Egg on a roll, a doughnut and coffee…
The ghost commuters queue at the counter.
You greet each with ethereal banter,
Filling every want with foreknowledge
As you did in life, poised as Queen Noor,
Magisterial behind your register.
Here at last is my Brooklyn beyond change,
Moored and palpable as any mirage.
On the wall the cedars of Lebanon
Flame green in a vale of whitewashed homes,
Your village limned by shutter and lens
Into the split second of a sixth sense.
Had I grown up in your paradise
Of biblical resplendence, an oasis—
judging by the photograph—from the desert
of gain and loss, hatred, self-regard,
I might have stayed, believed home the reward
I longed for, though I’d covet the promise
Of life exalted in a gleaming city.
If so, time in the village that I’d left
Wouldn’t be, in the great scheme, very different
From where I found myself: the daily round
In a landscape of storefronts and row houses,
Apartment prospects with their towers
Of skyscrapers across the teeming river,
And that absence soaring above the harbor
Like a monument to anyone’s lost world.
If I sit here long enough with spirits
Of the neighborhood dead eating breakfast
I might see against the iridescent haze
Of your ancient plate glass windowpanes
My parents easing into their booth,
Regular as clockwork or ritual,
Though they wouldn’t see me, still corporeal,
On my stool-perch beside the chalk specials.
How strange to know death made them happy.
How rich they’d seem like the others, Sally,
Who look pleased this modest heaven is all
As they crowd in, ordering the usual.

Daniel Tobin is the author of five books of poems. Among his awards are the "The Discovery/The Nation Award," The Robert Penn Warren Award, the Greensboro Review Prize, the Robert Frost Fellowship, the Katherine Bakeless Nason Prize, a creative writing fellowship from the National Endowment for the Arts, and a fellowship in poetry from the John Simon Guggenheim Foundation.