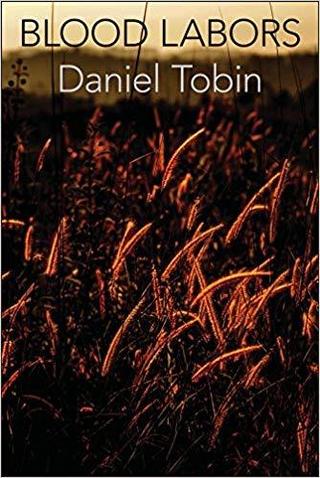 "Blood Labors is an ebullient and ecclesiastical wonder, capturing more of creation, the uncreated, the recreated than any dozen books on a poetry shelf. Tobin weaves the deep-world time of Charles Olson with the Irish Catholic lyricism of Seamus Heaney, resulting in poems as startling--and essential--as water. Of the abundance to praise in this book, let me single out the twelve poems of "Downstream"--a reveries, an origin myth, a surreal awakening--written with uncanny, terrifying beauty. All told, Blood Labors dazzles with its brilliance.


The Cat’s Eye Nebula—one could begin
there as a way of showing how being
folds in upon itself, always to form
new configurations. That’s where we’re from,
the vast compounded into the covert
as if all were the sum of a hidden vector;
and why I ply my art without a staple,
shaping each shear assemblage of plates
into what I wish, these bursting petals
out of a glue-less flatland that I wrap
to sculpt into their own particular warp
in space and time. With me, all reduces
to a page of elementals, rescued
into some new panoply, secured
for the time being in situ—my own seducer,
enwound by the delicacy of my desire,
the artifice in which I would reside,
and do. If they remain merely these brief
renderings, they keep nonetheless the fiber
of things passing, like late afternoon pools
after showers that disappear in loops
of process, lithe, un-regarded spools
that only seem intricate cuts, heart-
less, the inevitable goings of the earth.
With every misstep, with every fraught lapse,
one seeks a new ordering, sudden leaps
of the unforeseen that answer pleas,
or appear to, a twist before which failure pales.
I venture the fold, the pleat, the scar,
the code by which geometries of arcs
come clear to the mind, with every edit
harboring evidence of a new tide,
the saint behind the stain, or at the fringe
a center plain to the patient finger—
the weather’s wreathe of incipient snow
in which spring’s last, early layers are sown;
which is not to say in the hour of the wolf
there is no bitterness in the flow,
or the looking back brokenly at the last,
resolving then into a pillar of salt,
the fleeting prospect that was Lot’s
true inheritance, his marriage to the lost.
To make these creased tessellations rife ores
out of which fish swim blindingly from roes
and all of that flaming to a rose—
is to conjure skin that skeins without a sore
as seconds famish, flourish to an era.
What I want to say, is that all we are
at core is something like an attending ear
and the world an infinitely facile veil,
the migrant medium of where we live.
Think of an expanse of winter field,
its impression that, in time, nothing’s filed,
that all that was there quietly rinses
away into the whiteness, like resins
glazing in sunlight. A song of sirens
could not be more vagrant, its dis-ease
harrows and lures us as, at the seaside,
one hears a hush from the deepest shelf
that calls to every increment of flesh.
It is the lone presence of the sensual
through which the spirit sings and unseals,
like those paper butterflies a king saw
in his dream, saw they were what he was.
Hardest hatreds, scattered threads, trash, despair—
I fold, and sink, and sound, until it’s praised.

BULK
According to some recent physicists, our four dimensional space
constitutes a “brane” that is merely a part of a higher dimensional
reality called “the bulk.”


Far off in the unsayable distances
Beyond effect and cause, our own vast
Membrane no bigger than a nanochip
In the still vaster assemblages, the bulk
Hunkers, endless stack, infinite sum,
Barnacle lashed to the whale of itself
Cruising to no home, nowhere near here
Where on the far side of the stockade fence
Between facing yards our neighbor ventures
Outside her house, a screen door slamming shut,
Then smoker’s cough on the guttering porch
Glimpsed between weathered gray slats,
Or wondered at through a passing veil of leaves
From the deck above: her hoard, her detritus.
How long since we’d heard her husband died?
For years on weekends his music blared.
Saddened for her, but not alone in being
Glad for the quiet, we worried our respects
Across the gulf of our differing lives,
And kept that quiet when her daughter’s shouts
Echoed outside the peeling clapboards
To please stop, she was pleading, her drinking.
Years since, the quiet has settled in,
Her presence signaled by her clotted hacks,
Insistent, massing. She moves among them,
The unused tables, haphazard chairs,
Scattered playthings on grassless ground,
The dog-less doghouse, and at the lot’s edge,
Wedged in by growth, monumental, moored
To nothing but its own floored gravity,
A delivery truck, mottled gray, rust-worn,
No sign of what goods it once had carried,
Windows fogged with grit, the ancient wheel still,
As if somehow it has always been here,
Always will be, while the satellite lens
Pulls back, panoptical, into its ken
With the blown weight of every receding thing.